The Adventures of Kidney Boy

A Journal About Living With End Stage Renal Disease. Dialysis. Transplants. Love. Family. Friends. The Unsung Donor. This is my life, from the end of a needle to the bottom of a pill bottle.

While my surgery had been a rousing success, and I was well on my way to feeling better (feeling AWESOME even) my father hadn't fared so well. 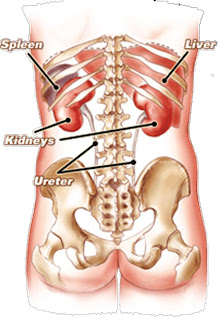 My Mother told me during his laparoscopic procedure, something had gone wrong and they'd had to open him up - quick and dirty.  See, in today's surgery for transplants the doctors use laparoscopy to make small incisions, and then using computer-aided surgical tools, remove the kidney with as little damage as possible.  Now, most people have no idea where your kidneys are.  I've included a handy diagram to show you - they're in your torso, towards the back - hidden under a protective layer of RIB BONES.  Not very easy to get at, honestly.  Somehow, during my father's procedure, one of the tools used to perform the procedure malfunctioned and failed.  If they didn't act quick, they'd loose the kidney AND my Dad.  So they cut in, and took it out the hard way.  Which left my Dad in quite an amount of pain.  The day after my surgery, I was up, walking, smiling and laughing and I went upstairs to see my Dad.  He was semi-conscious from all the pain medication they had him on.  But he managed to see that I was doing well, and he smiled.  The poor guy smiled through all his pain.

Man, I was going to owe him big time.  I promised myself I'd at least buy him a Big Mac when he was better.  As for me, I was just thrilled that I was making urine.  I didn't even have to go use a bathroom for the first few days - they had a foley catheter in me, so I just walked around, carrying my giant bag of urine proudly.  I wandered the hallways of the recovery floor, showing my bag of pee to anyone who would look.  It's not often that one can show someone a bag of piss without getting whisked away for being insane, so I took advantage of the opportunity often.

The doctors would walk by, noses in wrinkled disgust until I said, "Aren't transplants the BEST?!?" and then they understood.

Finally, after a few days, a nurse came in to remove the foley catheter.  If you've never had one, getting one put in is embarrassing enough (luckily, this time I was unconscious when it went in!)  but getting one out is usually an uncomfortable experience for everyone involved.  The nurse grabbed me by my tackle and "deflated" the balloon that was inside my bladder - and then gave a tug on the tube that was sticking out of the end of my.... privates.  I grunted as the tube slid out with a sickening thud.  I was sore and swollen down there, to say the least - but in the positive, I felt a little like Ron Jeremy for a little while.  The Nurse, head hung in shame, walked out the room - as I, head too hung in shame, immediately ran to the bathroom - and proceeded to coat the toilet with the thickest coat of pee I could muster.  The glorious yellow bounty of waste removal flowed from my body into the toilet with the grace of a thousand gazelles.  Okay, maybe the grace of a dude who drank too much Ripple the night before - I put one hand up on the wall, sighed, and whizzed away.

I went home a couple days later - it was all still surreal.  I'd been visited by countless friends and family, along with many members of the transplant team - many of whom gave me tutorials and introductions to all the drugs I'd be taking.  I'd be taking A LOT of pills everyday, but who cares - a lot of pills is WAY better than feeling like crap and doing dialysis!  They gave me a huge pill case to hold them all, and introduced me to the pharmacy girls downstairs.  I came to know them really well, as I got all my drugs from the hospital pharmacy for the first few months.

My Dad came home a little while after me, still in great amounts of pain.  The guy was sore as hell - but he put up a good front, and even managed to host friends who came over to the house to celebrate his and my recovery.  We both spent a lot of time in sweat pants the next few weeks, and while I just continued to improve and feel better, Dad was still sore.  The pain meds he was on would make him a little loopy, too - I had a billing problem with my wireless carrier then, Cingular.  My Dad wrote a several page diatribe to them, threatening all kinds of legal action with the attorney general and such.  It was an amazing piece of literature - he handed the letter to my Mom and asked her to mail it out.  Using her better judgment, she didn't send it out.  Later, when he had better control of his senses, he sheepishly said "Did you send that letter out.....?"  We still laugh about it to this day.  My Dad's a passionate man - doubly so when pain meds unbind ya!

My recovery was amazing - I'd never felt so alive.  I had a well-spring of energy inside... it was amazing.  I'd never felt so good.... I was looking forward to so many things.  The holidays were amazing.  My family was so happy for me - and my friends were all amazed at my progress.  I had to stay indoors for several weeks while I recovered - my immune system was comprised, and my body had to adjust. Eventually, I went out with some friends for a big night on the town.  We went out, late at night, to the bastion of late night food and weirdness.  Dennys.  I had to celebrate a new kidney with a dish like "Moons over My Hammy".  Needless to say, it was one the best trips to Denny's I ever had.  I was particularly fond of the time I went to the restroom, went in the stall - peed, and when I was done I let out a "WOOHOO!"  I heard a voice in the bathroom say "Yeah!  I know what you mean, dude. Just don't play with it."  I resigned to keep my celebrations to myself in public from now on.