The Adventures of Kidney Boy

A Journal About Living With End Stage Renal Disease. Dialysis. Transplants. Love. Family. Friends. The Unsung Donor. This is my life, from the end of a needle to the bottom of a pill bottle.

Living with a fistula

So, specifically, I do a form of dialysis called hemo-dialysis.  There's actually two major kinds of kidney dialysis that people tend to do in the United States.  Hemo, which I'm on, and peritoneal dialysis.  With hemo dialysis, an access is placed in your body which allows a dialysis machine to be attached to your body, and a small amount of your blood is cycled out, cleaned and has water/waste removed, and sent back to the body.  The process takes about four hours for most people - sometimes more, sometimes less.  Most people do this three times a week - and while the treatment itself lasts four hours, the whole process takes longer.  There's about a half-hour of prep before the treatment - cleaning your access site, getting the supplies ready, and having the needles put in.  Then there's post treatment - you have to have your blood returned, and the needles removed - and then you have to apply pressure bandages to stop the bleeding from where the needles were.  That can take up to half hour - then, I like to wait around for a while to gain my bearings as you can get a little dizzy, loopy and tired after treatment.  Doing dialysis isn't just something you "do" and then get on with it.  It takes up your day, and can ruin the whole thing.  I think a lot of times when I tell people I know "Oh, I have to do dialysis..." they think it's like taking a pill and moving on.  It's not - not at all.

As far as hemo-dialysis accesses go, most people either have a port, which is a plastic tube, attached to their chest and it goes into your jugular vein.   When I first when on dialysis, in an emergency situation, I had one of these in my chest.  It was a bit awkward, and the speed at which the dialysis machine could run wasn't that fast.  Eventually, I had an artereo-venous fistula put in my right arm.  Basically, it's where my vein and artery were surgically attached to each other to make one large vessel that could handle the use of the large needles needed for dialysis.  (15 guage needles.) 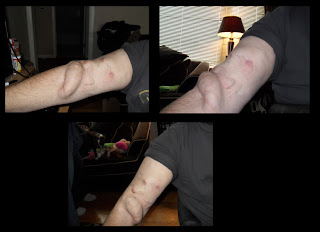 It takes a bit for the vessel to mature, but once mine did - boy, did it mature.  Mine's very healthy, though.  I'm lucky.  Some people's don't last very long, they develop aneurysms and they're rendered useless.  I've had mine for almost seven years, and it's still going strong.  I can achieve high blood speeds on my dialysis machine, so I get good treatments quite often.  But living with this is hard -  I have to be careful with it - I can't lift heavy objects with the arm any more, and I if that ever gets cut.... I'd bleed out in an instant.

I've never done peritoneal dialysis, but from what I understand, a catheter is placed in your "stomach" where the peritoneal cavity in your body acts as a filter - dialysis fluid is added, and the blood is filtered in there, and then cycled out.  Sounded a little too gross for me.

So, I live with this giant sausage of an access port on my arm, and it kind of gets in the way a bit.  My arm can ache from it, and I try to wear long sleeves a lot to cover it.  It's kind of unsightly, but my wife (God bless her) is very kind about it and often says "You should be proud of your fistula!  It works amazingly well and it keeps you alive!"  She's got such a great attitude about things, even when I'm ornery about it.  (On any given day I complain about the thing: how I hate how it looks, feels, etc.)